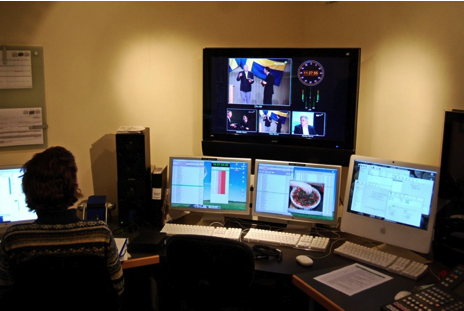 LifeStyleTV is a Christian based lifestyle channel located in southern Sweden. We broadcast 24x7 on satellite and now also on the Internet. We are a small station with a big vision - to reach all of Scandinavia. To accomplish this it is important for us to optimize productivity, reliability and cost effectiveness in all of our equipment, software and workflow. We therefore chose a 100% Mac based environment built around Apple RAIDs and an X-san that integrates with all our editing stations. In our postproduction this, of course, meant using Final Cut Studio. This was not that new. But not many stations used a Mac solution for a 24x7 play-out with the reliability needed for satellite broadcast. How to resolve the play-out was our biggest question.

We were impressed with the reliability and easy to use interface. The price was right too. We have been very happy and satisfied with this solution, and after three years of use we would never change it for anything else. It just works.

One thing was clear, we wanted a Mac based solution that could play the files straight from our RAID without having to copy or convert to any other format. It had to be easy to work with and reliable. After the first few months of testing a program from a different company we were at a point of despair. It had caused so much heartache, frustration, and bad PR due to its constant problems and failures, that we knew we had to do something different. It was then we found Softron Media Services and its software. After reading a bit about it, I downloaded a trial version of OnTheAir Video and installed it on my Laptop. After only 5 minutes of configuring I had it up and running from our RAID. I was amazed! The next day we installed it on one of our servers, connected it to our SDI router through a BlackMagic card and it was up running on an external screen in no time. Wow.


After testing OnTheAir Video and the scheduling module for a few weeks, we were impressed with the reliability and easy to use interface. The price was right too, and we decided to purchase the software with an extra license for a backup video server. We have been very happy and satisfied with this solution, and after three years of use we would never change it for anything else. It just works.


We are now working on outfitting our own OB-van, for easier on-the-road productions. Here again we want to go Mac based, and have decided to go with Softron’s MovieRecorder as our solution for capturing all recordings.


Over the years we have appreciated the very helpful customer service from Softron Media Services and their continued commitment to improve and further develop their products. We look forward to see what the future brings.